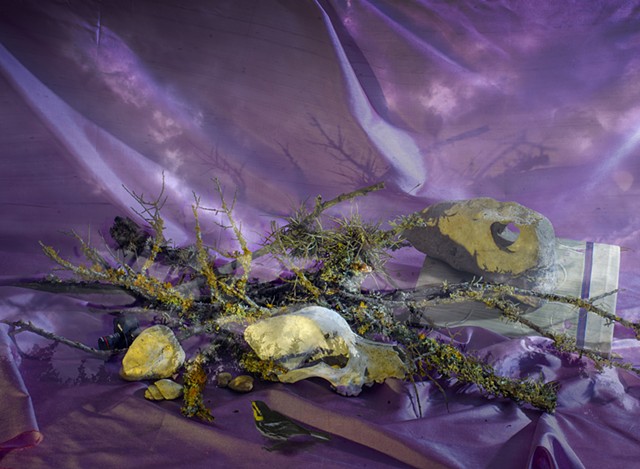 I photographed this golden-cheeked warbler a year ago. It appeared on my deck as I was walking into my studio. I slowly, quietly removed my cell phone from my pocket so as not to scare this beautiful bird away to photograph it. It didn’t move much, so I slowly entered my studio, retrieved my studio camera and continued to photograph this bird. At first I thought it was injured – it hardly moved. After about 10 minutes of photographing from all angles, I turned my head and when I turned back, the bird had flown away. I later confirmed that I had been photographing a rare golden-cheeked warbler.

Many things in the photo are gifts. The lichen laden branches and clam and snail fossils from my husband, the coyote skull from Diana Pena, something she found hiking behind our house and then gave to me. I found the rock outside our house and always intended to use it in a still life with the skull. The book is something I made as a gift.