The Muses of Mount Helicon 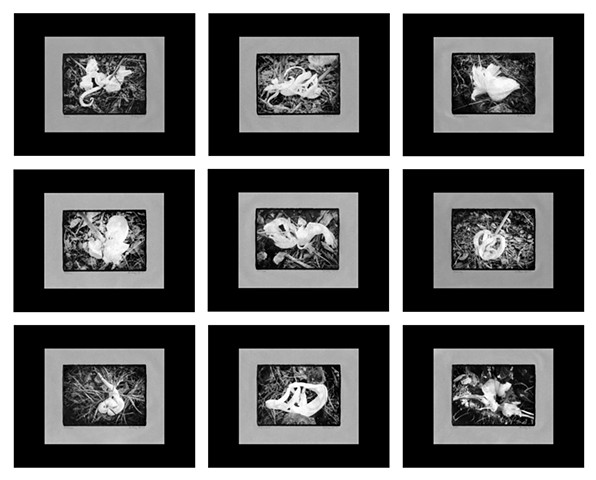 %But what is my business round tree or rock? Come now, from the Muses let us begin, who with their singing delight the great mind of Zeus the father in Olympus, as they tell of what is and what shall be and what was aforetime, voices in unison. Hesiod, Theogony/Works and Days%

According to the Greek poet Hesiod, the Muses were produced by the union of Zeus (god of the sky and ruler of Olympian gods) and Mnemosyne (goddess of memory and the inventress of language) for the purpose of distracting beings from the trials and tribulations of the day. They celebrate the arts, literature and science and inspire creation.

While watching TV, on a freezing morning in December of 2016, head cluttered with bad news of the day, I was drawn outside of my house and into the woods by numerous very strange white objects on the ground. My first thought was that trash had blown into the woods. Reaching for them I discovered, to my surprise, that these objects were actually fragile ice formations that broke into fragments upon my touch.

Knowing they were ephemeral (freezes don’t last here), I immediately retrieved my camera and photographed. About two weeks later this happened again, and by this time I knew the dead stalks that were centered in this magical ice formation were called frostweed (Verbesina virginica). The discovery of these temporary ice formations was not only unexpected, but inconceivable. So, my source of inspiration, these magical frozen Muses, became my distraction from the current political climate.

The process used in these images is very hands-on. These photographs are digitally printed on inkjet vellum and the central image is backed with silver leaf. The paper is then sealed with acrylic varnish. Metal leaf incorporated into the photographic print is an homage to the beginnings of photography where nearly all of the early photographic processes utilized metal salts.

Symbolically, The Muses of Mount Helicon are a distraction from appalling current events, instead inciting creative activities and appreciation of the natural world much like the muses of ancient Greece inspired Hesiod’s poetry and artists throughout the ages.