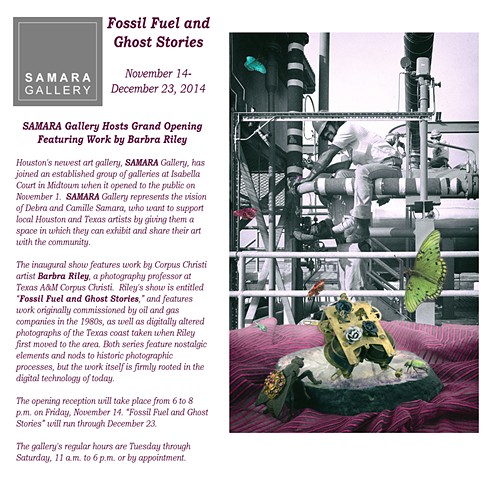 In the early 80s, I was commissioned by several oil and gas companies to photograph both commercially and for fine art purposes. With the recent interest in the Eagle Ford Shale, I decided to revisit my 120mm negatives and incorporate these scanned images into my still lifes. They are both nostalgic and contemporary, as I bring them into the digital age using family heirlooms, fossils, minerals and other eclectic items in the foreground.

Upon my arrival in Texas, a Spanish professor told me a story about a woman, Chipita Rodriguez, who was hanged for a murder that she claimed not to have committed. Her ghost is said to haunt the creeks and riverbeds of San Patricio County. There are many more legends that take place in in the damp and mysterious woods along the Texas coast. The photos are from South Texas, scanned from negatives shot in the 80s while I was discovering my new home state.

South Texas Ghost Stories incorporates the look of early photographic processes with mixed media including walnut ink, an historic drawing medium. Cyanotype (blue print) was popular in the mid 1800s as were some of these legends. Rather than illustrate, I create the feeling of being in these places with the haunting spirits from these stories surrounding me.